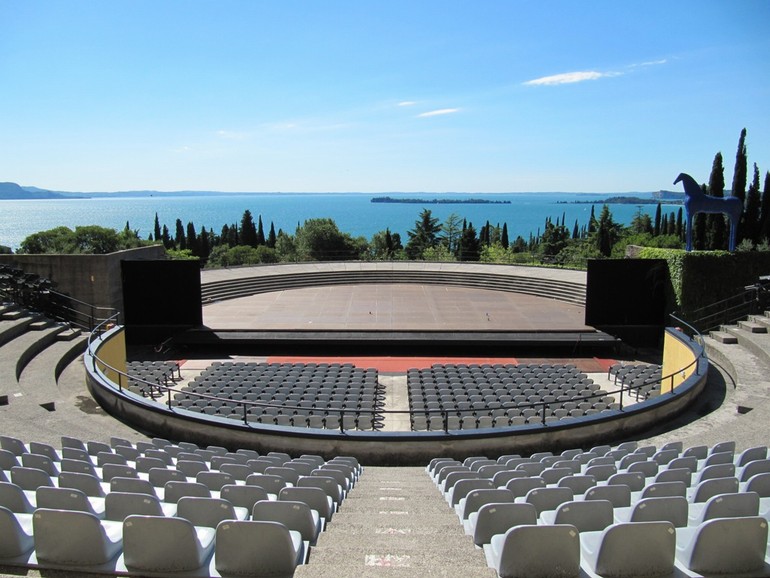 The "Vittoriale" is a citadel surrounded by walls which stretches over an area of nine hectares plus a tower-dock by the sea about a hundred metres from it. The Vittoriale is an extremely complex monument made up of a number of buildings: a big Amphitheatre (the biggest in the Lake Garda area with about 1,500 seats), paths, squares, hangars, gardens and parks with fountains, streams and an artificial lake. The house, called "Prioria" by Gabriele dAnnunzio, has remained exactly as the poet furnished it. Thousands of furnishings, works of art and relics, which remind us of Gabriele dAnnunzios heroic life, are still preserved in the various rooms. The Vittoriale - one of Italys most visited museums (about 200,000 visitors per year) - contains the SVA aeroplane and MAS 96 boat (used by the poet in his famous war exploits), the Fiat model 4 and the Isotta Fraschini. In the "Schifamondo" wing there are the Auditorium and the War Museum, dedicated to Gabriele dAnnunzios military experience. The Nave Puglia (a military vessel), donated by the navy to the poet, is extremely fascinating as it is set in the rock and surrounded by the wonderful trees of the park. The mausoleum, is situated on the highest bill, it is the tomb of dAnnunzio and the legionnaires of Piume. In the Prioria gardens there are many relics and works of art: the "Massi della Grappa" (the Grappa rocks) and the historical "Monti di Guerra" (the mountains of war), the Arengo and the precious Canefora by Martinuzzi. From the gardens you can enter the Vallette dellAcqua Pazza and dellAcqua Savia.
In the open-air theatre of the Vittoriale, surrounded by a unique and suggestive landscape, in July and August you can enjoy the rich theatre season which goes from the opera to the operetta, from classical to folk music and from prose to ballets and recitals. The Vittoriale is also theater: its open-air amphitheater, which can seat up to 1,500 spectators, is surrounded by a breathtakingly beautiful setting. Its theatrical season in July and August hosts ballets, operettas, plays, cabaret, classical music and pop concerts.